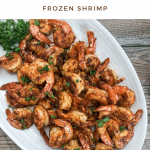 Learn how to cook frozen shrimp in a skillet on the stove-top.  It really is possible to get perfectly seared shrimp even when shrimp has been frozen.  I'll share my number one secret that works each and every time.

Have you ever tried getting that perfect sear on your shrimp and have failed?  Or, have you wondered why you can't seem to get that beautiful brown coating on your shrimp that you see in restaurants or some recipe sites?  Instead, you're stuck with pink rubbery shrimp.  If so, I've been there.

How to thaw frozen shrimp before cooking?

No matter which cooking method you're using for a particular recipe, shrimp must be thawed first in order to remove the digestive tract that runs alongside the top and under belly of the shrimp and that is a MUST.

When defrosting shrimp, you have 2 options:

After the shrimp is thawed and have been thoroughly cleaned, line a baking sheet with layers of paper towels and place the thawed shrimp on the baking sheet in a single layer.  This method will allow the paper towels to absorb any moisture from the shrimp.

In addition, use a paper towel to pat dry the top of the shrimp to absorb any remaining moisture.

With that being said, do not ever put frozen shrimp in the microwave to be thawed.  Doing so can potentially change the texture of the shrimp.

Why this method works

I tried everything until it dawned on me that shrimp should be treated similar to other meat that requires a sear if you're going for that beautiful golden brown crispy outer coating.

Instead of using a paper towel to pat-dry as you would before searing meat, place the shrimp on top of layers of paper towels to dry after cleaning them, and that my friends is the secret. By doing this one thing, was a complete game-changer and is why this method on how to cook frozen shrimp works especially when wanting that perfect sear or crunchy outer coating when frying.

Should I defrost shrimp before cooking?

Yes, you should defrost shrimp before cooking for a few reasons and here's why: 1) Shrimp must be de-veined and cleaned; 2) If you want perfectly seared shrimp; 3) To prevent the shrimp from releasing extra water or ice crystals into the recipe; 4) Allows the seasonings to adhere to the shrimp better which makes the shrimp more flavorful and doesn't make the recipe taste watered-down.

How long does it take to cook frozen shrimp?

Whether you're searing, baking, sauteing, broiling, roasting, boiling, or grilling shrimp after they have thawed, they cook really fast.

They only take a few minutes to cook depending on the size and the cooking method. If they're cooked too long, they can become dry and tough.  With that said, transfer them to a serving bowl or platter to prevent the residual heat from the skillet from cooking them further.

How to clean shrimp?

The process for cleaning shrimp is quite simple.  You'll need to: Remove the outer shell and discard; 2) Remove the tail or leave it in tact (I typically leave it intact for presentation purposes depending on the recipe; 3) Use a paring knife or steak knife to cut a slit along the under-belly lengthwise and along the back lengthwise to remove the digestive tract; 4) Rinse under cold water.

How to tell when shrimp are done?

Perfectly cooked shrimp will turn from translucent to opaque pink in color.  As they cook, they will form into a nice loose "C" shape; however, if they form into a tight "O" shape this is an indication that they're overcooked.

For a sure-fire way to tell if shrimp are cooked properly, use a meat thermometer to check the internal temperature.  This is done by inserting the meat thermometer into the thickest part of the shrimp.  When the temperature reaches 140 degrees F, they're done.

If you've ever wondered how to cook frozen shrimp, I hope this has helped with any questions or uncertainties you may have had.

Did you make this recipe?

If so, let me know how it went. Leave a 'Star Rating' within the recipe card down below and/or TAG @cookingwithbliss on Instagram. I can't wait to see how it turned out. 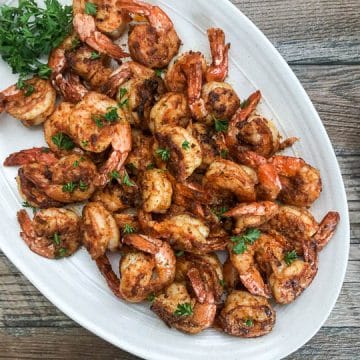 How to Cook Frozen Shrimp