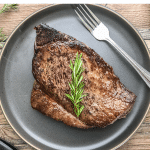 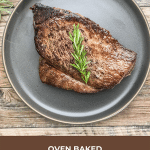 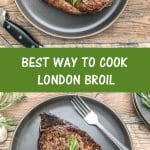 The Best Way to Cook London Broil in the oven requires 2 key steps… 1) searing and then 2) baking. So, stick around to learn a few simple techniques to get that perfectly cooked London Broil that you’ve been craving.

This has been a popular recipe on my blog for a few years and is perfect to make during the weekday when you’ve run out of ideas or you’re pressed for time and need dinner on the table quickly. It requires simple ingredients and has a cook time of 30 minutes depending on whether you prefer your beef cooked medium-rear to medium or well done.

For a complete and satisfying meal this recipe pairs well with these amazing sides:

Kosher salt: Season generously with kosher salt unless you’re following a low-sodium diet. Quite honestly, you can use any of your favorite seasoning combinations to elevate the flavor even more. Don’t be afraid to experiment to add your twist.

Clarified butter: If you’re following a dairy-free diet, use clarified butter or ghee in place of regular butter. My daughter has to limit her dairy intake, so I chose clarified butter instead. However, feel free to use just cooking oil, for example, extra virgin olive oil or grapeseed oil if you prefer not to use butter.

Rosemary: Quickly frying the rosemary, before sautéing is a pro tip for added flavor.

See the recipe card for quantities.

Best Way to Cook London Broil in the Oven

Follow these simple instructions for the best flavorful, simple, and tender London Broil.

Searing your London Broil FIRST before baking it in the oven is a MUST.

What is the best temperature to cook London Broil?

Should I wrap my London broil in foil?

No, it's not necessary to wrap in foil; however, I strongly recommend using a meat thermometer to check the internal temperature. This will take the guess work out of knowing if it's done or not. It cooks pretty quickly, so you want to make sure that you DO NOT overcook cook as it can become dry if you do not stay on top of it.

Did you make this recipe?

If so, let me know how it went. Leave a 'Star Rating' within the recipe card down below and/or TAG @cookingwithbliss on Instagram. I can't wait to see how it turned out. 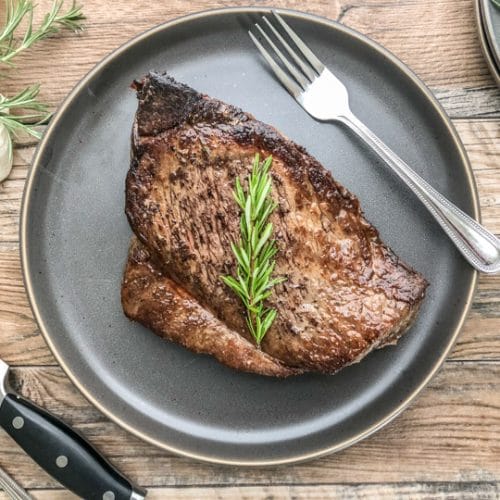 **Please note: Nutritional values serve as a guide only as values may vary.   Season the London Broil  liberally with salt   Do not overcook, as it can dry out and become tough to chew   After the London Broil has rested, cut thinly against the grain before serving